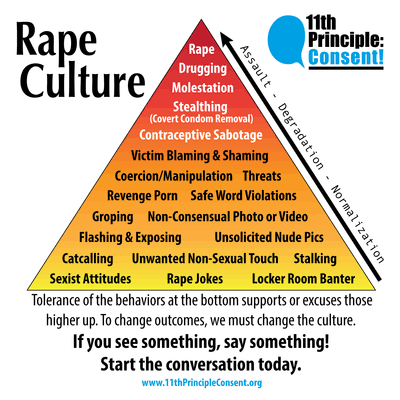 A society’s social attitude to normalise,

The otherwise unacceptable ideas and actions.

And wait for it to enlarge & crystallize,

Denying it of open public mention.

“Blaming the victim” is what this society is good at,

“Isn’t your skirt length too short?”

Instructing girls to be home before dark,

Instead teach the boys to behave, not pass experts’ remark.

Creating and laughing at those lame rape jokes,

Or exploding with too much private details,

Is not and will never be ‘cool’, it entails.

Taking all this lightly and avoiding open talks,

Isn’t the solution, rather pushing it across.

Why the society is mute and acting deaf,

Putting at risk dearies of oneself ?

Don’t let them assume it as an approving thought.

Then this will be a boost and make them climb a ladder higher,

And move from victimization to degradation much sooner.

We sure hate to admit but we have all been through this stage,

Silenced by our fears or elders, though filled with rage.

That inapt whistle blowing much.

Those stalkers, real or virtual.

Avoiding the first stage, silenced at the second,

Facing it across generations with no amend.

This further instigates them higher on the pyramid,

“Removal of Autonomy”, Autonomy me have?, We never did.

Leaving them isolated or to the fate of desertion.

And now, habituated she is not to raise voice,

Submissive as she is made, does she even have a choice?

Even at this stage, when these things and such people aren’t stopped,

Such matters aren’t paid heed to and people not a lesson taught.

Testing the victim and her family’s patience in the times of turbulence.

When they should have rather extended some support,

They rather put cross allegations, doubt and harass her,

This curbs her strengths and adds up the fear.

Fear to take a call and stand upright,

Fear to speak what was on sight.

Fear of family’s goodwill and reputation.

When she did no harm, still the accusation.

These are few different people at different levels,

While some men are also real jewels.

Not blaming any gender but the society’s tendency,

When and how shall this all stop?

Probably from where it did pop.

By stopping it at the grass root level,

And letting freedom and equality travel.

And asking our girls not to be submissive to irrational pun.

By taking a call to accept and applaud against this culture,

And not just be a mere prey to this enormous evil vulture.

P.S. – I don’t mean to target any individual by my thoughts but yes I do wish to target rather attack this tendency, attitude and mindset that is so well imbibed in our society and civilization that we don’t even realise that we practice it. THINK Before you ACT.

A change in our mindsets can only change the world.

Also I express gratitude to those concerned for the featured image.