Today, you’ll write about the most interesting person you’ve met in 2014. In your twist, develop and shape your portrait further in a character study.

The first person who struck me after reading this description is a man who drove us (my family & I) to Darjeeling from Gangtok. A retired man in his mid-sixties, ordinary looking, short-height, well – built, grey hairs and wrinkled yet smiling face. Going by his looks, no one could ever say that he was a driving-champ who can smoothly run over the hilly terrain crossing the twists and the turns and passing through those scaring mountains slopes and that too in  a dark rainy night (as there are no street lights on that hilly area).

He initiated a conversation by introducing himself and asking our names and educational qualifications individually. While we were answering to all that he asked, he maintained the rapport by indulging himself in the conversation by telling us what his children have done/do. We all felt a little awkward in the beginning as we had never met such an extrovert (or say super – friendly) person before but later we were all very comfortable with the way he talked with due respect to all and being careful enough and concerned about his driving. He also told us about his life, the problems they face, his achievements amongst the many other things. By all this, you will understand why I call him a generous, gentle, humble, honest, hard-working, courageous, courteous, sensitive, sensible, well-mannered, dependable, down-to-earth and a laid back person. He was a very joyful and happy-go-lucky kind of a person, very optimistic towards life. In no ways, was he a taciturn man. He made us enjoy the ride thoroughly making us know the dangers involved and still not frightening us.

But while on the way, I admit that I was badly frightened, almost dead (amidst that dark and rainy night anybody would have lost senses) when we got stuck at a point where the car started to go down the slope while we were climbing up the hill but that experienced & daring uncle (I won’t prefer him calling a driver, he was that friendly and charming and made us feel so comfortable) struggled hard to get over it and finally he did and saved us from a nearing death experience, which I am sure no young driver could do. He was very attentive, careful and took defensive manoeuvres all through the drive.

Truly, he is one of those interesting persons I’ve met this year. 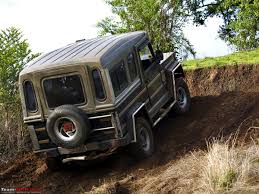 [Not a pic that I clicked then, but will help you understand the situation we faced.]